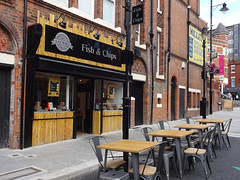 It was previously a fish and chip shop and pizza place called Eat Well, but this closed down some time in 2017 or 2018. The last time we definitely saw it open was in July 2017.

The premises were previously occupied by New Vintage, but vacant photo and advertised to let as of July 2012. Still vacant as of October 2013.

As of February 2014, the shutter had been painted in the colours of the Italian flag photo and there was a notice outside saying it was being refurbished by a company called Catersales, suggesting that the new occupant would be some kind of Italian food-related business.

An Italian cafe called Franco's Caffe photo opened on Friday 14 March 2014. The proprietor told us he'd been trying to get the lease for 18 months, but things were delayed by Blacks (the owner of the building) going into administration. Franco's Caffe served coffees and teas photo of sign, cakes, pasta dishes, gnocchi photo, sandwiches, and cold savouries such as pea frittata photo. Unfortunately it closed again some time between April 2015 and April 2016 photo.

Another Italian cafe called Ciao Bella photo opened in April or May 2016, under different management. This specialised in pizza and calzone, but closed down again after only a few months; by September 2016 it was closed and undergoing shopfitting work.

Yet another Italian cafe called Eat Well On The Street photo opened in late November or early December 2016. This specialised in pizzas as well as grilled meats served in baguettes, with chips, or with rice. As of mid-April 2017 it was temporarily closed for refurbishment during roadworks on Surrey Street, but by mid-July 2017 it was open again and specialising in fish and chips but also still doing pizzas.