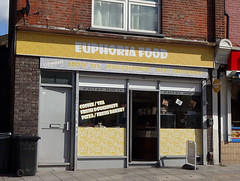 It has a small amount of eat-in seating: just two tall stools at a counter.

By August 2012 it was a cafe called To A Tea, which as well as the usual sandwich bar stuff also did some Chinese and Japanese food. This included sushi, though usually just one type of maki roll per day. To A Tea closed some time between November 2014 and April 2015.

By April 2015 it had become Bózza photo, a bakery selling pizza slices, pastries, and sandwiches. This became Martin's photo around May 2017. According to a member of staff in June 2017, it got a new owner during 2016 but they didn't change the name immediately. Martin's was fairly similar to Bózza.

Some time between December 2017 and October 2018 it had yet another new owner and name change (to Euphoria Food), and samosas and English pastries were added to the offerings.

Accessibility: A fairly large step to get in. The only seating is on high stools.