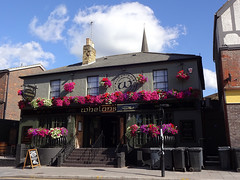 Pub on Selsdon Road in South Croydon. It opened in August 2018.

According to a board outside in March 2019, food is served noon-9pm Mon-Sat and noon-7pm Sun.

The premises were vacant as of August 2012. Still vacant as of October 2013, though there was a potential sign of life in that there was a notice up outside photo stating that Star Pubs & Bars (a division of Heineken UK) had applied for permission to make changes to the interior.

Still vacant as of April 2014. Another potential sign of life had appeared in that Star Pubs & Bars made another application in April 2014 for fascia signs for "Gus O'Connors Irish Bar"; this application was refused by Croydon Council due to the use of floodlighting, but it seemed likely that an amended application would go in soon.

Still vacant as of November 2014, but as of this month another planning application for signage, this time reading "The Folly", had been granted; see PDF of proposed signs.

Still vacant as of July 2015, with a sign offering it to let and promising a "planned refurbishment" photo.

By early December 2015, it had reopened as The Baskerville photo. According to a member of staff, the opening day was 4 December. As of September 2016 it served food noon-10pm every day, plus breakfast 8am-noon on Fridays and Saturdays only. It had a small outdoor seating area at the side. There were several steps (with handrail) to get in. More steps inside on the way to the bar, toilets, and much of the seating (mostly single steps with no handrail).

The Baskerville closed down in October 2017. The premises were still vacant as of early December 2017, with the furniture removed but fixtures such as bar and handpumps still there; this remained the case as of late February 2018. In August 2018 it reopened as Whelans.