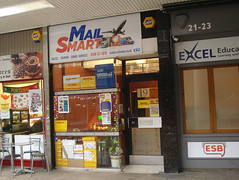 It was previously occupied by Mail Smart, a parcel delivery, courier, and cargo service, but in August or September 2018 this moved to 31 St George's Walk due to redevelopment of this part of the block photo of notice.

It was previously occupied by a beauty salon called Beautiful Harmony. As of May 2012, Beautiful Harmony appeared to have moved its operations to Cianna Hairdressers a few doors down at number 11, while the premises at number 19 were closed and boarded up photo.

The boards were removed by June 2014, though it remained vacant photo.

In August 2014, planning permission was granted for "Use as retail desk for postal courier business". This opened as Mail Smart by December 2014. In August or September 2018, Mail Smart moved to 31 St George's Walk due to redevelopment of this part of the block.