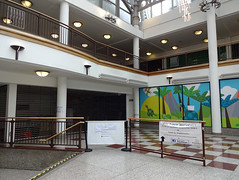 Open space on the lower level of the Whitgift Centre, vacant as of December 2019.

It was previously occupied by a cafe and children's soft play area called Priscilla's Play Cafe photo, but this moved to units 1013-104 on the upper level in December 2019 photo of notices, photo of sign.

It was previously run by Beanies photo, which moved here from 3-7 Middle Street around the end of 2014. However, Beanies closed some time in 2018. By October 2018 the space had been taken over by Priscilla's.