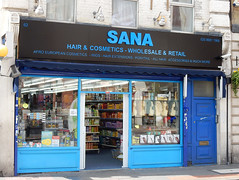 Beauty supplies shop on the High Street. It opened some time between February and May 2015.

It was previously occupied by Atlantis Amusements photo, but vacant and advertised to let as of July 2012.

The frontage of a new fish shop (Sea Food Supermarket, the second branch of Fresh Fish on Church Street) was in place by December 2012 photo, and it opened in early 2013. However, it moved to 21 Surrey Street in February 2015 photo of notice.