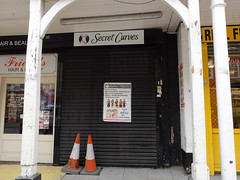 It was previously a girdle and padded underwear shop called Secret Curves photo; this opened in early 2015, closed down again in early 2017, and reopened in the Whitgift Centre by late May 2017 photo of sign (as a stall next to Millie's Cookies).