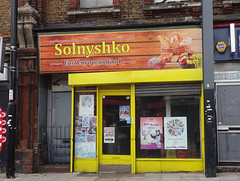 As of June 2012, they stock things like dark rye bread, Eastern European dairy products, rollmop herrings, quite a lot of meat products, and unusual types of alcohol.

Accessibility: A large step to get in, and it's quite small inside.

According to a photo on Flickr, as of c. 1980 the premises were occupied by an RSPCA "fund raising centre and committee rooms".

By May 2012 it was a Russian/Eastern European delicatessen called Solnishko photo. This acquired a new shopfront in 2016 photo along with a new transliteration: Solnyshko.