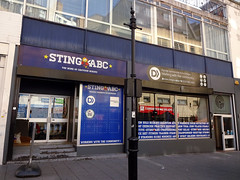 Business premises on Surrey Street, vacant as of December 2019.

It was previously occupied by the Sting ABC boxing gym, but in October 2019 this moved to 58-59 Centrale and changed its name to Croydon Boxing Academy.

It was previously a shoe shop called Shoe World photo, but this closed down some time between April and December 2015.

Some time between May 2017 and June 2018, signage appeared for a boxing gym called Sting ABC photo. We aren't sure exactly when this opened.