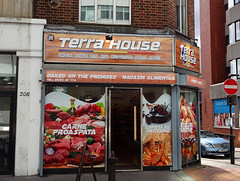 Romanian grocery shop on the High Street. It opened in June 2017.

They also do daily hot specials photo of board in October 2017. (They used to do freshly-made sandwiches on their own bread photo of menu as of July 2017, but as of March 2019 they no longer do.)

It was previously an Italian deli and sandwich shop called either The Deli or Toni And Claudio Deli Sandwich Bar photo. As well as freshly-made sandwiches, they sold various Italian groceries such as tomato products, different types of pasta, things in jars, and olive oil. There wasn't any seating, but there was a small counter to stand at while you eat your sandwich. As of August 2013 they were cash only.

According to a sign in the shop, they would be closed for holidays from Monday 26 August 2013, reopening on Monday 23 September. They also had an extended period of closure in September 2012, with a note saying that post should be delivered to Amplifon, so it seems like they might have closed for holidays every year.

The Deli closed down some time between March and June 2017.