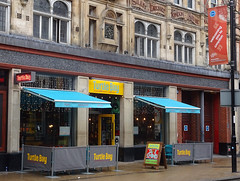 Caribbean restaurant on the High Street, part of a chain. It opened in early 2017.

The premises were previously occupied by a bar, nightclub, and restaurant called Tiger Tiger photo, but this closed down in January 2016.

The space remained vacant for much of 2016, but as of December 2016 there was building work going on inside and a sign in the window photo inviting applications from people who'd like to work at a forthcoming branch of Turtle Bay Caribbean restaurant. Turtle Bay was open by February 2017.