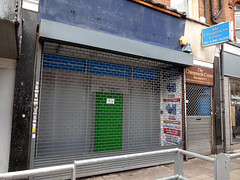 Business premises on George Street, vacant as of December 2019.

By May 2012 Kizala had moved to 16 St George's Walk and been replaced by a convenience store called Quick Stop Express photo, but this closed down some time between August 2014 and February 2015.

The Chiropractic Centre remained until 2017, when it moved to Solutions Gym on Lansdowne Road (part of the Lansdowne Hotel complex).