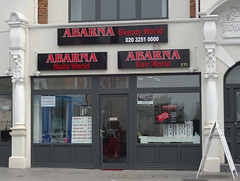 It was previously a beauty salon, manicurist, and hairdresser called Abarna Beauty World, which opened some time between May and September 2017, but this closed down again some time between June 2018 and August 2019.