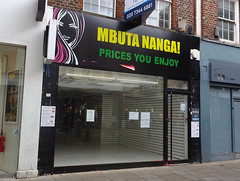 As of June 2018 it's covered in scaffolding photo.