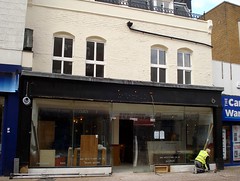 Business premises on North End. It's been vacant since at least May 2012 (the previous occupant was a shoe shop called Soletrader).

In October 2012, Costa Coffee were granted a planning application for a change of use "from A1 (retail) to a mixed use (A1/A3) coffee shop".

As of mid-March 2013, shopfitting work has started inside, though it's still not clear whether it will be a Costa Coffee branch or something else.

The occupant as of December 2011 was a shoe shop called Sole Trader (or possibly Soletrader or Sole|Trader) photo. This had closed by May 2012, with the premises boarded up photo and advertised to let. In November 2012, Sole Trader opened another branch a little further along the street at number 72.