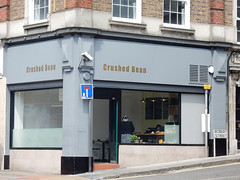 Coffee shop on the High Street.

It originally opened in May 2015, but closed in early 2017 for a refurbishment and a change of management. It reopened in late March 2017 under the new management and with a different menu.

The premises were previously occupied by a barber and men's hairdresser called Angelo & Lino photo, but this moved around the corner to 1 Robert Street in early March 2015 photo of sign.

As of April 2015 there was refurbishment work going on inside, and by mid-May 2015 a coffee shop called Crushed Bean had opened. This closed in February or March 2017 for a refurbishment and a change of management photo of sign in window, and reopened again with the new management and a different menu in late March 2017.