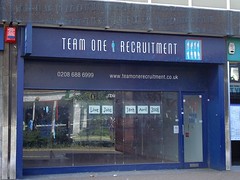 Vacant as of July 2012, with signage indicating it was previously occupied by a recruitment agency called Team One Recruitment.

In March 2013, a company called The Gym Group was granted planning permission to use the ground and part of the first floor as a gymnasium.