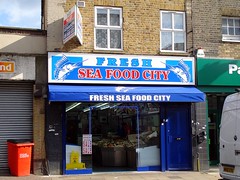 Fishmongers on Church Street. It opened some time between mid-February and mid-May 2013 in the unit previously occupied by Rub-A-Dub children's clothes shop photo.