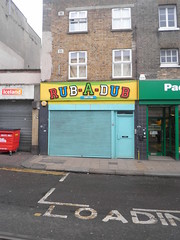 Vacant and advertised to let (but under offer) as of early December 2012. Previously a children's clothes shop called Rub-A-Dub.

According to a photo on Flickr (most easily visible at original size), as of c. 1985 the premises were occupied by a shop called Cavendish Cards.
Church Street ...