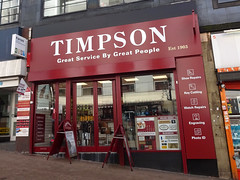 Key cutting, shoe repair, and locksmith at the Crown Hill end of Church Street. It opened some time between October 2017 and March 2018.

Accessibility: A step to get in; because the shop is on a hill, this step is much taller at one side than at the other.

According to a photo on Flickr, as of c. 1985 the premises (along with the neighbouring 2-4 High Street) were occupied by a shop called Saxone.

According to another photo on Flickr, as of January 2009 it was a "shoe repair and keysmiths" shop called Croydon Cobblers.

By July 2012 it was called Shoe Care photo, with a frontage advertising shoe repairs, key cutting, engraving, watch repairs, sharpening, house signs, trophies, and chipped car keys. However, on asking in the same month, the staff informed us that they do not in fact do knife sharpening.

Some time between October 2017 and March 2018, Shoe Care became a branch of Timpson photo.