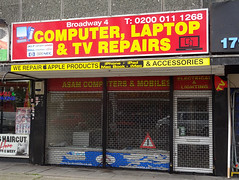 Business premises on London Road, vacant as of September 2017.

Still vacant as of November 2017, but signage has appeared for a clothes shop called Divine Boutique.

It was previously an electrical goods and electronics shop called Broadway 4 photo, but this closed down some time between March and September 2017 photo.

By March 2012 it was an electrical goods and electronics shop called Al-Waqt Electrical Ltd photo, with a frontage advertising "electronics, computers, mobiles, watches & accessories" as well as mobile phone unlocking and Western Union money transfer. This changed its name to Broadway 4 photo some time between December 2013 and April 2014, and closed down some time between March and September 2017 photo.
London Road ...