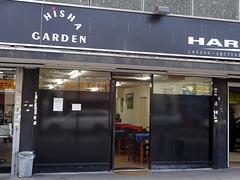 Small Turkish cafe on London Road. It just does coffee, no food, and as of October 2017 it has a sign indicating that it operates as a members-only club.

As of June 2018 we haven't seen it open for quite some time.

According to a member of staff in October 2016, it had been open about a year at that point (though it still had no name on the frontage).