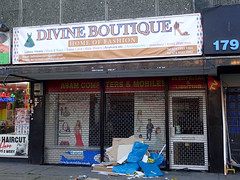 Business premises on London Road. As of June 2018 it seems to be vacant but with shopfitting work going on inside.

It was previously an electrical goods and electronics shop called Broadway 4 photo, but this closed down some time between March and September 2017 photo.

By March 2012 it was an electrical goods and electronics shop called Al-Waqt Electrical Ltd photo, with a frontage advertising "electronics, computers, mobiles, watches & accessories" as well as mobile phone unlocking and Western Union money transfer. This changed its name to Broadway 4 photo some time between December 2013 and April 2014, and closed down some time between March and September 2017 photo.