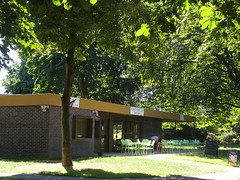 Cafe in Wandle Park. It opened in July 2014, and in mid-2015 was taken over by local social enterprise Mum's The Chef, which also has a unit in Centrale.