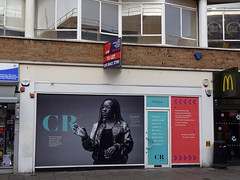 Business premises on George Street near East Croydon Station, vacant as of December 2019.

The premises were previously occupied by a branch of Starbucks photo.

According to Google Street View, Starbucks had been there since at least August 2008. It closed for good on 23 September 2012. As of October 2012 the premises were completely stripped out photo and advertised to let. The situation remained the same as of June 2013.

As of late July 2013, there was signage up for a patisserie and cafe called "Sweet", and the interior was being fitted out photo. Sweet opened in August 2013 photo. It did a few pre-made panini, but aside from that all the food was sweet things. It closed down some time between February and May 2018.