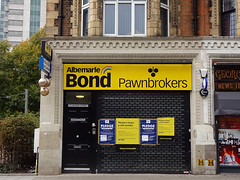 Business premises on George Street near East Croydon Station, vacant as of October 2019. Still vacant (and to let) as of December 2019 photo.

It was previously a branch of Albemarle Bond photo, but this closed in 2019, apparently along with all the other branches.

According to the Albemarle Bond website, this branch opened as Rio jewellers in 1985, and was bought by Albemarle Bond in 2005 but continued trading under the Rio name for some years before being rebranded as Albemarle Bond. According to Google Street View, it was still called Rio as of August 2008.
George Street ...