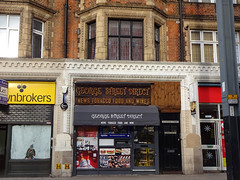 It was previously a branch of McColl's photo, which according to Google Street View had been there since at least August 2008.