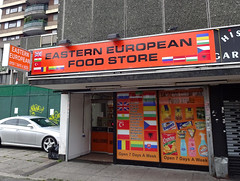 Grocery shop on London Road. It opened in October 2017.

Around half of the space is taken up by soft drinks (both chilled and on regular shelves), but it also stocks things like biscuits, teas, coffee, tinned vegetables, and pickles.

As of March 2012 it was an Anatolian community centre called Anadolu Kiraathanesi/Peri Community & Social Centre photo.

Around June 2016 a mobile phone and computer repair shop, internet cafe, and dressmaker/tailor called Croydon Mobiles And Computer Repairs opened up photo. By October 2016 this had become Needlez, offering "stitching & alterations" photo, but this closed down some time between March and July 2017.

As of early October 2017 a sign reading "Eastern European Food Store" had appeared photo, but this didn't appear to be quite open yet. It was open by late October, and a member of staff confirmed that at that point it had been open less than two weeks.