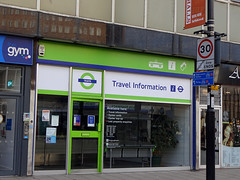 According to the Unofficial Croydon Tramlink Site, this is the place to go to deal with Tramlink-related ticketing problems and lost property, and it also sells a small range of Tramlink merchandise. According to a sign in the window as of August 2012 photo, they can't help with Oyster problems.