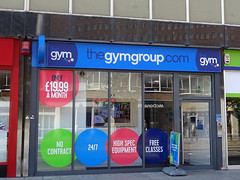 Gym on George Street near East Croydon Station. It opened in early 2014.

In March 2013, a company called The Gym Group was granted planning permission to use the ground and part of the first floor as a gymnasium. As of October 2013, they'd put up signs in the windows photo and their website stated that the Croydon branch was due to open in 2014.