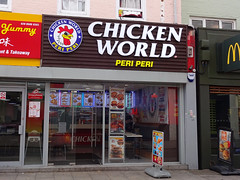 At some point it was an Italian restaurant called Papa Roberto's; see photo of old sign revealed during renovation works in 2015.

It was later a cafe and sandwich shop called Sara's Diner photo, which was open by July 2012 but closed some time between January and October 2014.

As of late October 2014 there was signage for a business called "Hot N Sour" coming soon photo. As of mid-November the sign was still there but nothing had happened yet. It finally opened as a cafe and buffet restaurant under the name of Hot N Sour in late November or early December 2014 photo, but was renamed to Cafe Bite Out photo some time around April 2015. According to a member of staff, nothing else changed except the name.

As of December 2014, they did cooked breakfasts from 8am-noon photo of sign, and from noon onwards there was a buffet which includes Chinese, Indian, and European food (e.g. beef lasagne). They also did sandwiches photo of sign, fish and chips, kebabs and naan, and hot and cold drinks. According to the owner (via email, December 2014), all the food was halal.

Cafe Bite Out closed down some time between April and December 2015. As of December 2015 the interior had been completely stripped out and there was building work going on photo taken through window. According to a sign in the window photo, it was to be a branch of Chicken Cottage.

Chicken Cottage opened in January or February 2016 photo, but closed down again some time between September 2016 and May 2017.

As of May 2017 it was vacant but with work going on inside to divide the unit into two. The larger side reopened as Chicken World some time between then and mid-July 2017.