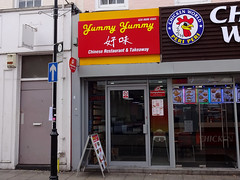 It's very small but does have eat-in space.

It was previously part of the same unit as Chicken World next door. As of May 2017 this larger unit was vacant but with work going on inside to divide it into two. The smaller (left-hand) side reopened as Yummy Yummy some time between then and October 2017.
Existence last checked in December 2019.
Church Street ...