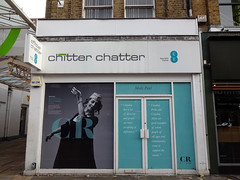 It was previously a mobile phone shop called Chitter Chatter photo, but this closed down in January or February 2017 photo.