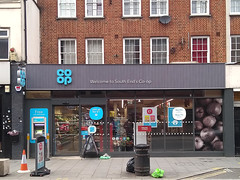 Supermarket on South End. It opened in late 2018. It has one external cashpoint.

According to the Croydon Advertiser, the premises used to be occupied by a French restaurant called Jardin de Provence.

By August 20112 it was an Indian restaurant called Mirch Masala photo, part of a London-wide chain, but this closed down some time between April 2015 and February 2016. As of February 2016 the frontage was covered with flyposters photo and the phone had been disconnected. As of July 2016 it was still vacant but had signs up saying it would open soon as a branch of pizza restaurant Bianco 43 photo.

Bianco 43 opened in July or early August 2016 photo. It also did takeaway and delivery, with online ordering via Deliveroo. It closed down again some time between September 2016 and April 2017 photo.

The premises were vacant as of June 2017, and still vacant as of October 2017. The Croydon Advertiser reported in February 2018 that it was due to become a Co-op supermarket late that year, and by October there were signs up confirming this photo. The new Co-op was open by December 2018 photo.