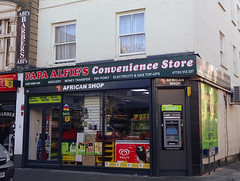 African grocery shop on the corner of Church Street and Old Palace Road. It opened some time between October 2017 and June 2018. It has one external cashpoint which doesn't charge for withdrawals.

It was previously an army surplus shop, but as of early December 2012, the premises were vacant, shuttered, and advertised to let.

In Autumn 2013, plans were announced to run a series of pop-up shops in the space. The first of these, a babies/children's clothes shop photo, opened in October 2013 and had closed again by January 2014 photo of stripped-out interior taken through shutter.

In June 2014, the pop-up shop reopened in larger premises across the road at numbers 86-66.

Number 81 remained empty photo for a few months, but by July 2014 an appliances (white goods) shop called UK Monster Deals photo had opened. This closed again some time between November 2014 and March 2015 photo.

In April 2015 an African grocery shop called Alfie de Alfie photo opened up, having moved from its previous location at 3 Overton Yard (where it was variously known as Alfi Afro, Alfred's Food Store, and Cape Coast Market). This closed again some time between June 2015 and the end of 2015.

As of March 2018, signage for "Papa Alfie's Convenience Store" had appeared, along with an external cashpoint, but the shutter was down when we went past on a Monday lunchtime, so we weren't sure if it was open yet. It was definitely open by early June 2018.

Accessibility: A large step to get in.