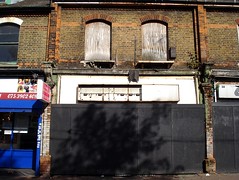 According to an old sign revealed during 2019 photo, it was once occupied by a business called F W Bowditch.

At some point it was a shop called Modesty Wholefoods; however, according to a photo on Flickr, by c. 1985 it appeared to be in use as either storage or an extension of a knitting shop next door.