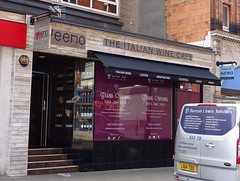 They don't serve cooked meals, but have a wide range of Italian bar snacks including cured meats and cheeses as well as panini and salads.