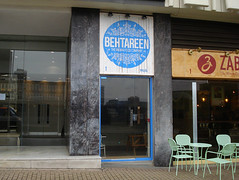 Indian cafe on Dingwall Road, near East Croydon Station. It opened in January 2015. It also does takeaway.

It initially did a wider range of Indian food (see photo of menu from February 2015), but as of April 2017 it's focused on biryani.

Accessibility: A large step to get in, but there's step-free access via Zabardast next door. Toilets not checked.