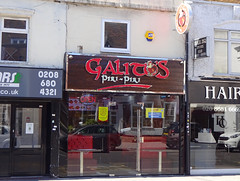 Chicken takeaway with eat-in space on South End. It opened around the end of April/start of May 2019.

It was previously a fried chicken and burger takeaway called Chicken World photo, which became a similar business named DFC photo some time between October 2017 and June 2018 and then closed again by December 2018. The premises were still vacant as of February 2019 photo and late March 2019.