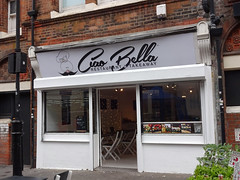 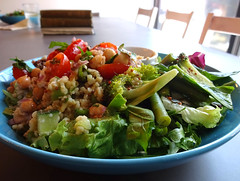 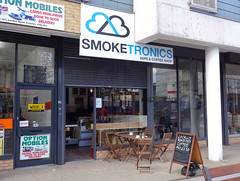 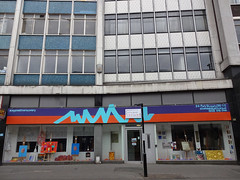 Croydon has acquired several new food places since we last posted. Firstly, an Italian cafe called Ciao Bella has replaced the sadly-missed Franco’s Caffe at 54 Surrey Street. Just around the corner from there is new Caribbean restaurant The Dutchie, in the basement at Unit 3, The Arcade, 32–34 High Street.

A branch of sushi chain Kokoro has opened at 42 George Street (the old premises of Mexway), offering an alternative to Centrale’s Yo Sushi and the Whitgift’s Tashi Sushi (though don’t forget the long-standing Osushi at 47 South End — unlike these, a proper restaurant).

A “tech hub” called TMRW (or possibly Tomorrow) has opened at 75–77 High Street, incorporating an open-to-the-public cafe called Byte Cafe. Vegans will enjoy their substantial salads, but omnivores are catered for too.

For those who like desserts, there’s now a branch of Krispy Kreme in the Whitgift Centre.

Moving on to food shops, a Portuguese, Brazilian, and Angolan grocery shop called Luso has opened at 43 St George’s Walk; while a branch of Tariq Halal Meats has opened at 89 London Road, bringing camel meat and wagyu beef burgers to the people of West Croydon.

Vaping is apparently the new thing. Smoketronics, the vape and coffee shop previously reported as “coming soon”, has now opened at 187 London Road, and another vape shop called Vapepit has opened at 123 South End. Nine months ago, Croydon had no vape shops, and now it has three (Evapo at 158 Whitgift Centre having opened late last year).

Croydon being Croydon, we also have a new art gallery, hairdresser, clothes shops, and yet another place offering mobile phone repair. 2–4 Park Street is now the home of art studio and gallery Studio Upstairs, which aims to support people with mental health problems, and provides drop-in art sessions as well as exhibitions.

The London Bridal Boutique, which used to have a concession in Croydon Council’s Pop-Up Emporium at 86–88 Church Street, now has its own permanent home at 45 St George’s Walk. Those who desire clothing for reasons other than weddings can visit Project Fashion, a new discount clothes shop at 29 Whitgift Centre. 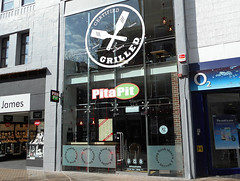 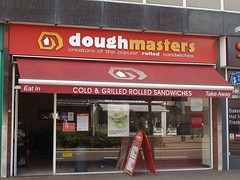 It’s been a few months since we last did a round-up of recent closures, so there are several to report.

In food-related closures, Pita Pit at 125 North End, Chilli Room at 24–26 South End, Pizza Express at 3 South End, Doughmasters at 4 Suffolk House, George Street, Grill@12 at 12 Norfolk House, Wellesley Road, and Bodrum Kebab at 48 High Street are all no more. The closure of Doughmasters is perhaps the most poignant of these; according to the notice in the window announcing its closure, it had been in Croydon for 20 years.

Finally, Aurum has closed its shop at 95 South End due to expiry of the lease, but continues in business at its other premises at 290 Lower Addiscombe Road.

Previously reported as “coming soon”, The Meze Lounge opened briefly at 65 South End but then closed again. It is now under new management and due to reopen this Friday (22 July 2016).

The old premises of Mirch Masala at 40–42 South End have signs up saying a branch of pizza restaurant Bianco 43 will be opening there soon. 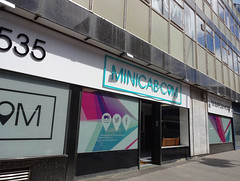 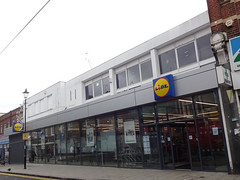 Several other businesses have also moved: Geoffrey Butler Cycles has moved from 15 South End to 429 Brighton Road, CR2 6EU, the Whitgift Dental Practice has moved from 1080 Whitgift Centre to 70 Chatsworth Road, CR0 1HB, Minuteman Press has moved from 12a Suffolk House, George Street to 19 Stafford Road, CR0 4NG, and the EE shop at 85 North End has moved to larger premises next door at numbers 87–89.

In other name-change news, Harvest at 38 Surrey Street has become Tasty Heaven. They still do kebabs and burgers, but the fish and chips have been replaced by biryani. Everyday’s at 136 North End has changed its name to GFC, though the new management haven’t yet got around to changing the frontage sign. The formerly-anonymous mobile phone shop at 168 North End now has the rather unimaginative name of Croydon Mobile Centre, and Sasa Jewellery in the Whitgift Centre is now known as Caprice Jewellery.

Lidl at 68–74 Church Street has been extended into the neighbouring premises previously occupied by the Croydon Furniture Centre.

BHS at 69–73 Whitgift Centre is due to close at some point, due to the chain going into administration, but at the time of writing not even the staff have been told exactly when it will close.

Finally, the Five Guys burger chain has been granted prior approval to open a branch in part of the old Yates’s premises at 7–11 High Street, though at the time of writing there’s little evidence of this actually happening.