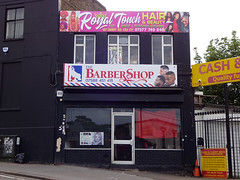 Business premises on Derby Road (though the address is on North End) near West Croydon Station, vacant as of November 2019. Still vacant as of December 2019.

It was previously a barbers called The Barber Shop and possibly also a hair/beauty salon called Royal Touch, but the barbers moved to 35 Church Street some time between September and November 2019 photo of notice. We don't know whether or where Royal Touch is operating now.

It was previously occupied by a hairdresser and beauty salon called Niha photo, but this moved to 60-62 London Road in July or August 2016.

Another hairdresser/beauty salon called Beauty Village photo opened in late September or early October 2016, but closed down again some time between January and October 2017.

A grocery shop and convenience store called Monika's European Food And Grocery photo opened some time around October 2017 but closed down again some time between February and June 2018. The premises were vacant as of August 2018.

As of October 2018 it was being refurbished to open as The Barber Shop photo, which was previously at 2 St George's Walk. This was open by early November 2018, along with a beauty salon called Croydon Therapy 4 You that was previously at 4 St George's Walk. The barbers was on the ground floor and the salon on the first floor. However, by late December 2018 there was a sign in the window stating that the first floor was available for rent, and the Croydon Therapy 4 You website had a note stating that it was "back to address [...] 22 Surrey Street".

By July 2019 there was also signage for a hair and beauty salon called Royal Touch. It's unclear whether this was actually open regularly (or at all); when we called in to ask about it, the barber downstairs said the owner wasn't there, and gave us a business card for it but couldn't give us any information. According to the business card it seemed to be run by Eunice Ogbiru.